“You know, maybe we could ditch the city and move here,” my wife said.

I’ll admit the idea had some appeal. After all, Southampton has its charms. Quaint cottages, long strands of tan sand sweeping along the cerulean shores of Lake Huron, and all that. Small towns are very convivial places and we were both raised in one, and small town races, too, have a different vibe to them than the bigger city-based ones. The Huron Shore run was no exception. This was to be the replacement event for the Oakville 10K that I missed when I was hurt, and I felt great going in. And notably, my son, at eight years old, having apparently falling prey to the running bug, was to run his first timed race, and would be in the starting corral with me. We had been out a couple of times earlier in the week already and despite the fact that he would be one of the younger kids in the 3K race, he was raring to go (and seemingly slightly nervous).

There was additional motivation for me as well in this one. As I mentioned before, I have a close family member with gastric cancer who is now reaching the end stages of her disease. It has been very difficult. Though I was able to successfully raise several hundred dollars for Debbie’s Dream foundation in Cleveland, the fact that I didn’t run the marathon made me feel like I had some unfinished business, and so I decided that this race was gonna be dedicated to her and I was going to go absolutely all out. The race proceeds were partially going to an expansion of the cancer center at the Owen Sound Hospital, so I felt that was fitting.

It helped that conditions that morning were pretty much letter perfect for running. The sun was shining, temperatures were in the mid to high 50s, and the wind was limited to a fresh breeze of maybe 10 miles an hour or so out of the northeast. The race had a compact but surprisingly robust little runners expo (held, naturally, in the hockey arena, this being rural Ontario) and we were greeted warmly by the volunteers manning the registration tables. Everything was very well organized, and there were a lot of the townspeople out just strolling around the festivities and lending support to the event.

The half-marathoners were already out on the course when we got there, and the next event was the kids’ fun run, which was loudly cheered by the spectators. There’s something about watching a gaggle of 4- to 6-year olds charging down the street, legs pumping, some accompanied by their huffing parents, that’s enough to warm the cockles of any runner. My daughter was in their number, and indeed went so far as to hurdle a fallen competitor on the way to the finish line (rather than stop and ask if the other child was OK, of course, which maybe wasn’t the most sporting of acts but there was nothing that was going to keep her from that finish line).

The 3K (reserved for the teens and kids), 5K, and 10K runners were all slated to start at the same time, and my son got loose by warming up rather demonstratively to the strains of “Uptown Funk”. I passed out handfuls of jellybeans to the kids (and scarfed a few myself) and we posed together for a dual-generational photo in all our athletic glory just before the races were about to begin. In the corral, I looked proudly at the boy, who was bouncing with pent-up energy. I searched for something to say that wouldn’t sound like a bad sports cliche.

The runners. Doin’ what runners do. Kinda.

“Don’t be afraid to push yourself,” I told him. “One thing you’ll learn about running distance is that sometimes it feels tough to keep going. But don’t ever quit, because in the end, it always hurts more to quit than to see the race through.”

“I won’t. Good luck, Dad,” he replied, smiling a smile that I know I’ll remember for a long time. As we counted down to the gun, I said a quick prayer to whatever capricious gods might be listening, and promised I’d do my best to live up to the advice I’d just offered.

Near the front of the pack, I set a fast pace. The course was an out and back along the waterfront, and this created a bit of a problem at the 3K turnaround because the race marshal there needed to be a bit more vocal about the fact that the kids running the 3K were about to miss it. This led to one of the kids, maybe 11 years old, doing a sudden reversal of direction right in front of me and I nearly steamrolled right over him. As it was, I only ended up having to break stride for a moment, but, being in the throes of competition I did end up fixing him with a bit of a baleful glance (which I felt kind of bad about later, but, you know, heat of the moment and all that).

I felt extremely strong early in the race, and the wind was more or less pushing me along, which I was enjoying at the time but knew would come back to bite me later. When the 5K runners turned around I knew I was pretty close to the front of the 10K group. I pushed hard, knowing that I had a good chance of at least an age-group placing given that the race wasn’t huge and I was making such good progress. Things got tougher, as expected, when we hit the 10K turnaround and I had to run smack into a wind that was a little brisker than at the start of the race, since we were facing the open waters of Lake Huron at that point. The faster half-marathoners had started to return by then and we ran alongside a few of them as the course took us into a side loop which was needed to make up the entirety of the 10K distance. By kilometer 7 my legs were loudly complaining at me, but I still felt I had enough left in the tank to keep a strong pace to the finish. We were starting to pass the 5K walkers now, and it took a bit of energy to get around them at times, but mostly they stayed out of our way. The course was flat as a board, which certainly suited me as I’m not much of a hill guy. As I rounded the last corner, I could see that the time was still under 44 minutes which was a bit of a pleasant shock – I knew I’d been pretty fast, but I wouldn’t have bet on that kind of a time. Thanking the aforementioned capricious gods, I had reserve enough to power to the finish in a near sprint, with my family cheering me on, and crossed the line with a fist pump.

I believe there may be a beer in my near future.

So, having set out to honor my loved one’s struggle with cancer, and do right by my son, my feelings were bittersweet; but I was pleased, and felt I had done my best. I shattered my old 10K PR by more than a minute, and in the end I did get on the podium, since the winner of my age group was one of the top three overall and the organizers gave medals to the next three fastest in the group accordingly. 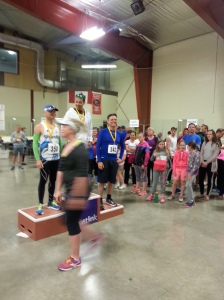 On the podium. We’re blurry because… we’re just so damn fast.

And my son took my advice and didn’t quit – he finished 14th out of 41 in a race where he was maybe the 6th youngest participant. I envy him, as his best racing days are ahead of him. And the old man will always be there to give advice (whether he wants it or not, I’ll wager). 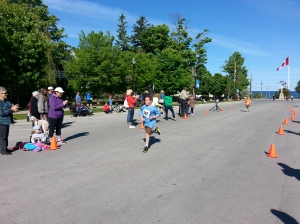 The future. Which will no doubt be faster than I could ever hope to be.